What Happens in Cincinnati: A (Marketing) Meeting of the Minds, Featuring Mike Dover

I arrived last. Not late…just last. Still, you never want to be the one holding up the party, especially when you’re there as the guest of a guest and you have never met anyone you’re about to shake hands with. The party, in this case, was dinner and a discussion with Mike Dover, author of several marketing and business books, the most recent of which is Wikibrands: Reinventing Your Company in a Customer-Driven Marketplace.

Martha France, my Marketing Director at DocuStar, and I, the Marketing Content Manager (writer), were invited to glean whatever insight we could from Mr. Dover, also the Managing Partner at Socialstruct Advisory Group, for our company’s blog series on marketing organizational leadership. As a young professional chasing his marketing dreams, I was excited for the opportunity to attend and write about such an event, much like Hunter S. Thompson receiving orders to chase the American Dream out in Las Vegas, except Martha is not my attorney, Cincinnati is not at all like Las Vegas and this most-assuredly isn’t “bat country.” (…Maybe that’s a bad analogy, then.) Point is, I thought it was pretty cool to get to be there.

There were nine of us total, almost too many to cram around that table of the 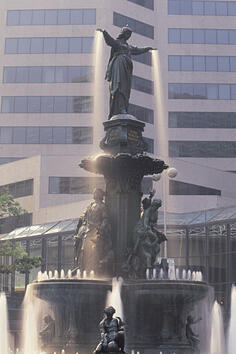 Given the experiences, clout and expertise that surrounded me at the table, I was just content to listen and had resigned myself to the role of a fly on the wall for whatever undoubtedly heavy discussion would follow. Drink orders made and polite direction given to the waiter that “cigars and stories” (proverbial, of course, as there is no smoking allowed in Ohio restaurants) would be the focus of the evening, a business-like air befell the table (operative phrase being business-like).

Taking into account the concepts detailed in Wikibrands and the fact that Mike was presently in Cincinnati to host a workshop based on the book, I had a good general understanding of what we would be discussing: building an enthusiastic digital community around your brand. Eager to listen with my mental notepad ready, Larry got us started, lobbing the first thought-provoking question right at…me. “As someone on the frontlines of this notion of digital community building, what do you do to drive engagement?” And so we began.

Despite the diversity of backgrounds gathered that evening, the discourse stayed surprisingly focused – at least long enough to dissect the following topics and highlight the vitals companies need to consider when building and managing online communities.

Factors of engagement
Quality, authenticity and credibility are a major concern when dealing with branded online communities. As marketers, we tend to be self-centered and only consider these factors from an audience-to-business perspective. In this case, however, it’s as much about how the community assigns those values to its own members. For example, community participants tend to be skeptical of overly glowing well-written product reviews, sometimes accusing the reviewer of being in legion with the organization under scrutiny.

A big factor in preserving quality, authenticity and credibility is the tone you’ve established for your community. If you effectively moderated discussion to keep the screaming fringe elements and “trolls” to a minimum, the community eventually develops a tendency to police itself. It’s important to keep in mind, though, that what is acceptable in the community – what is considered authentic – can be fluid and change over time.

While it can seem like people are only interested in getting into shouting matches in online communities, people are, for the most part, more open to participate in a community with reasoned discussion, and that’s the kind of discussion that will benefit your organization. You may get more comments from a controversial or polarizing topic, but it’s not the raw number of comments that will define your community’s success – it’s about the quality of the conversation, what you get out of it and what your clients get out of it.

Controlling the community and message
There’s a fear among many business owners and executives that participating in an open forum for dialogue is just inviting all the nay-sayers and boo-birds to come trash-talk their business. It’s a matter of PR control for them and they have a hard time letting go of that. This issue of control is a balancing act: you don’t want to be the KGB, but you also want to drive the conversation in directions that help you learn about/from your customers and audience.

When the conversation does turn negative, customer service has an opportunity to turn it into a PR win if they play it right. Just as valuable, if the negativity is centered on a product or solution, it’s basically a roadmap for the product development team to know where there is area for improvement or expansion. It’s important not to be too afraid when it comes to negative reviews. What is viewed as bad by one person may be good in the eyes of another. Mike used the example of TripAdvisor: A hotel review may be negative because the hotel had no activities for kids, but that is most likely going to be a positive in the eyes of a couple looking to get away from or avoid children.

Your communities (and this goes for social media as well, but more on that later) are not just for the marketing department; they are a necessary tool company-wide. PR, customer service, operations, product development, sales– they all need to be active participants. Marketing alone cannot own the brand story because then the story just becomes “window dressing.” The brand story must be part of the fiber of the whole company to give it authenticity.

The challenges of social media
Of course, the most common types of communities businesses deal with are their social media networks. And a lot of businesses have a hard time getting social media right. One of the biggest reasons companies struggle with social media is not so much the technology, rather it’s the fact that the medium is conversational. Companies are more accustomed to sending their message out, not receiving messages back. It’s a two-way conversation and they are not adept at that kind of communication.

An example was given of social media being like the old water cooler: If you are in the office having a conversation at the water cooler, you would be annoyed if a co-worker barged into the conversation and randomly exclaimed for all to hear, “There’s a pizza special today!” Businesses have to learn that social media isn’t always a place to sell. It’s a place to exchange thoughts, listen and be creative. You know, all the things that make someone seem “human.”

Lastly, measuring value is always at issue with social media. Twitter perhaps embodies this challenge best. You may have X amount of followers, but how many of those were on when you tweeted? Tweets have a quick shelf life and that means a lot of tweets go unseen. For example, hash-tags (#) for events are a popular tactic to drive conversation, but when the event is over, the message is essentially gone. It’s not easy to calculate the value derived from a tweet that’s there-and-gone; however, this isn’t really anything new to marketing, with magazine and print advertisers having faced similar challenges for decades.

To say the discussion was limited to what I’ve presented here would be to sell the entire evening short. But within the scope and context of Wikibrands, these were the

general musings and group consensuses. It was a graduate-level course served with a side of Scottish Salmon (if I neglected to mention there was food involved until now, the conversation must have been engaging) and it spoke to the character and quality of the Cincinnati marketing community – a round-table microcosm of the exchange of ideas and thought-leadership that takes place in this city daily.

I took in a lot of insight over those three hours, but the dominating sense I walked away with was this: When you think of Cincinnati and marketing, you think of the corporate giants headquartered here (P&G, Macy’s and Kroger, to name a few) but it’s the people behind the brands that make this city a special place to grow and learn – regardless of age, title or industry – as a marketing professional.