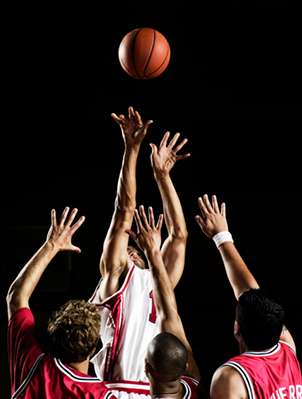 More than half the shots need to come from the three-point range. A sharp-shooters dream. Thirty-six different Pioneers have made a record-setting 6 three-point shots in a game. Most schools are lucky to have one player with that record.

Shoot 25 more times than their opponents. This requires discipline and a complete understanding of the overall strategy. In the words of one player, “you need to keep jacking it up.”

Offensive rebounds need to be garnered on 33 percent of the shots the team takes. This requires high energy and complete focus on positioning.

Finally, the team needs to create 32 turnovers with their press defense. This requires a steady stream of fresh players. Grinnell uses all its players in every game, and five-player substitutions are not unusual.

In short, Grinnell shoots before they can turn it over, and they create a tempo of play that fosters confusion and frustration with their opponent. By doing so, it often gives the Pioneers an opportunity to win with lesser talent. That’s an important point because as a Division III school, they do not offer athletic scholarships.

Grinnell’s strategy is creative, innovative and fun. Is there an application for smaller organizations as it relates to customer acquisition and loyalty?

I think so, because when tiny Grinnell executes on their strategy they win at a 95% clip. Innovation is often disruptive to larger existing organizations and this provides smaller enterprises with an opportunity to level the playing field. Possible applications in the current economy include:

Take the big three-pointer first. Translation: Do your P&L homework upfront and structure the best offer immediately. Don’t hold back, consumers with cash and a willingness to spend it are in short supply right now.

Position for rebounds. Translation: Monitor social media and understand how your brand is positioned.

Press to force turnovers. Translation: Leverage and engage your entire organization as it relates to customers and prospects. Your opponents may drop the ball and you’ll want to take immediate advantage.

The run-and-gun isn’t without its flaws; particularly on the defensive end. For example, Grinnell once scored 148 points in a game and still lost the contest. Even so, you can bet the entire audience was fully engaged.