How to Effectively Use a QR Code to Market Your Brand in a Catalogue: A Review

Although QR Codes are being used across varieties of industries, it is still critical to stress the importance of creating mobile friendly landing pages and to continue to expand on the innovation of QR Code applications. In that respect, we are excited to announce a new blog series on the reviews of current QR Codes that organizations are using in their marketing. For each blog, we will choose a QR Code to review and then offer tips and tricks on how to improve on them.

This particular review is on a QR Code for a company in the building products industry. We encountered it at the Cincinnati Home and Garden show. Each company participating at this event was distributing information to the general public by vehicle of brochures, flyers and handouts. It is surprising to find that very few of these organizations used the innovation and creativity of a Quick Response Code on their marketing materials to guide potential customers to engage digitally.

Fiberon Decking Solutions, a manufacturer of composite decking, railing and fencing products, incorporated a general QR Code onto the catalogue they distributed. The code was placed on the back of the catalogue at the lower right hand corner. We have to give credit to Fiberon for creating a code that was easily scanned on an iPhone, Windows Phone and Android Phone; however it was not technically sound for a Blackberry. Although Blackberry’s tend to be used primarily for business purposes, a QR Code should be able to be scanned on any type of phone. 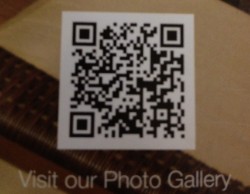 The code itself is simple in its structure: grayscale, dense, and about 1” by 1”. With the code is a great explanation that the scan redirects to a photo gallery of Fiberon’s products. This explanation is a very important way to engage your customer right away. Some people may not know what to do with this code or they may not want to take the time to scan it if there seems like there may not be anything in it for them. By giving them an explanation of where the QR Code scans to, you are showing them value and convenience in the scan. Once scanned, the code leads to the gallery of photographs on their website. Once on the website, they effectively capture the customer’s engagement by allowing them to view their many varieties of decking possibilities and to “save and share” the photos in a Fiberon Decking photo album.

1. Be Specific in your instructions
Unfortunately, most codes are still found placed on an ad without anything but the QR Code. This could cause low scan rates due to consumers being unaware of what to do with the code or where the code redirects. Fiberon did a great job explaining where the code redirects, however they could have expanded their instructions to include how to scan the code with a smart phone.
2. Add value
This is the key for any type of marketing campaign but especially for QR Codes. Delivering clear “value add” will improve the likelihood that a consumer will interact with a QR Code. It was a great idea to offer the customer a way to save the photos into a Fiberon based photo album, but to build on that idea they could have allowed the consumer to save the photos to their phone with an item number so that if they were to take it into the store, the distributor would know exactly what product to point them to.

3. Deliver mobile content
If the consumer has engaged with the code, surely you would like them to see something more than your website, and if that is where you want to redirect them, make sure the website is mobile friendly. Fiberon redirects the code to their online gallery, it is a great idea but it could have been even better if they tailored the landing page to be mobile device friendly.

4. Take it to the next level 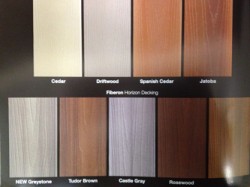 It was a great start for Fiberon to include a QR Code in their catalogue, but they could take it to the next level. Much of their catalogue includes color swatches of specific materials a consumer can choose, so why not have a QR Code for each individual item in the catalogue. This would allow a consumer to save the color swatch to their phone and go to the store with that photo.
5. Include a call to action
A QR Code does not always have to include a discount or coupon for the consumer, but after you scan the code it should include a call to action. Fiberon could have customized a landing page that stated “Save a color swatch and bring it into a store today!” The consumer then receives a tangible and helpful service while the company is more likely to bring that customer into the store.

QR codes can engage customers as well as build brand recognition if used properly and creatively. The big question is where to drive a consumer scanning a QR Code. A recent Consumer Pulse study has shown that people want relevant content. This could include discounts at the point of purchase, an interactive video or even interesting facts that could help the consumer in their purchase. With innovative ideas, a mobile friendly landing page and an effective call to action, QR codes can be a powerful way to engage your customers.

* For more information on how to use QR codes effectively, sign-up for QR Code Tips and Tricks.